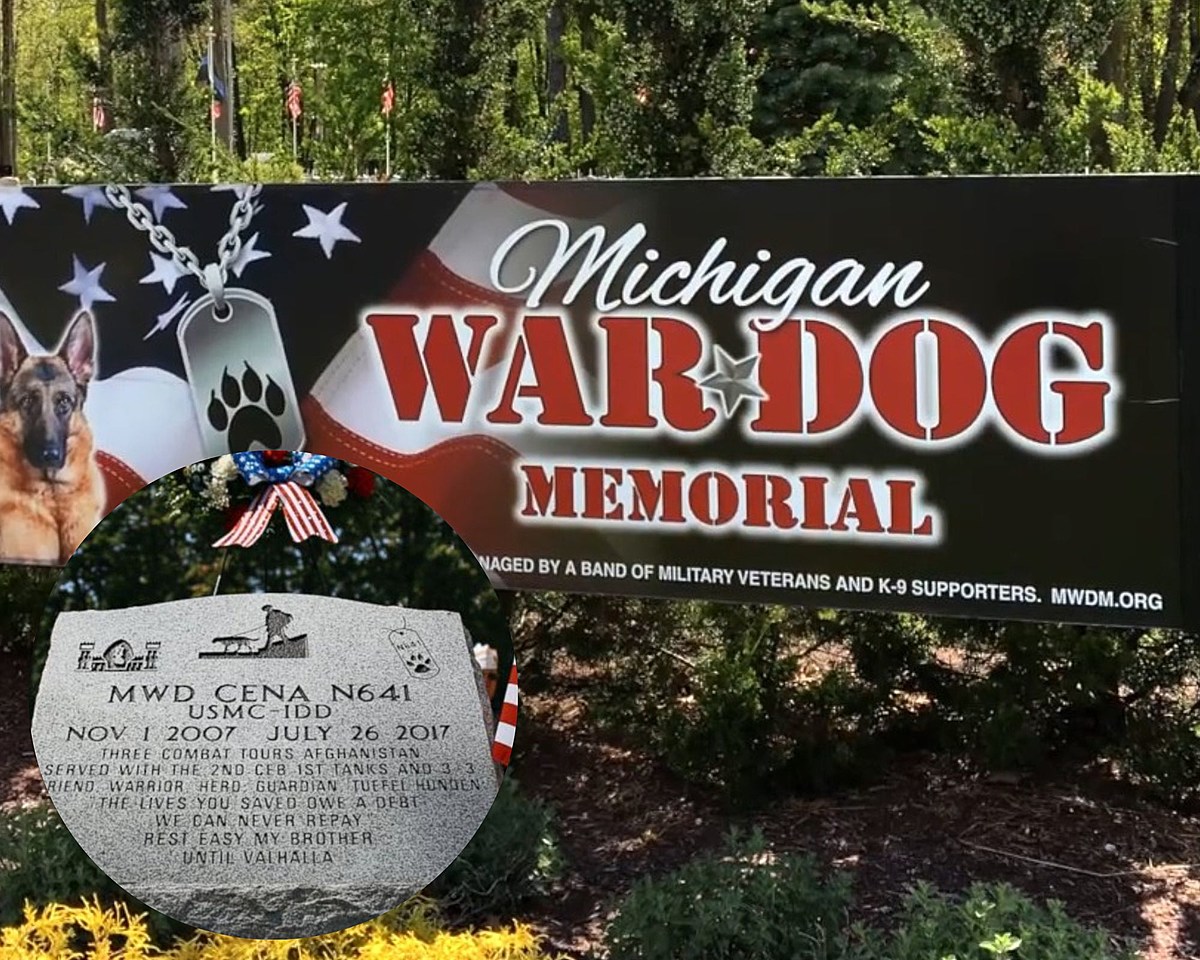 Not only do dogs participate in warfare, but they sometimes, like their human compatriots, pay the ultimate sacrifice.

The memorial is located in an Oakland County Pet Cemetery

The Michigan War Dog Memorial is located along 11 Mile Road northwest of Detroit in southern Lyons. It was created to honor the military working dog, dogs that were trained to work alongside soldiers in war zones, sniffing out bombs, mines, or even the enemy.

The Michigan War Dog Memorial, Inc. is a non-profit organization that will educate the general public about the heroism and dedication the K-9 give to serve and protect us through presentations and seminars.

Our mission is to continue the restoration of this sacred ground in a park setting and to maintain this setting for the purpose of allowing the burial of retired military working dogs and service dogs. Provide burial, with full honors, at no cost to master/owner. To provide research on military records and/or service records. This mission will be accomplished through private and corporate donations.

The War Dog Memorial has been in existence for seven years and currently honors dogs by having former MWDs buried on the grounds.

Here is a nice tour of the cemetery posted online recently by a visitor.

They also have a wall, similar to the Vietnam War wall in Washington, D.C.which honors former MWDs for their ultimate sacrifice during this same conflict.

During the Vietnam War, 4,234 “war dogs” were deployed. They had one main mission, to save the lives of our men and women in uniform. They did their job well, it is estimated that they saved over 10,000 lives during this war. As the war drew to a close an order was given that all troops would withdraw, the troops were delighted. All the dog handlers ran to the kennels and hugged their battle mate and said “Buddy, we’re coming home.” A few weeks later an order came from Washington DC to leave the dogs. The handlers couldn’t believe it, but the order was still there, sad but true.

The problem was that K9s were classed as equipment and it was customary when units are retired and excess equipment is not needed elsewhere where it was left. Since dogs are classified in the “Equipment” category, they fall under this rule.

To honor these well-trained K9s who saved so many lives, the Michigan War Dog Memorial erected a black granite wall with all of their names and tattoo numbers to recognize them for their service and sacrifice to our country. They will be forever remembered and “never forgotten”.

This was all an education for me, as I had no idea such a place existed. I also learned that there is a K9 Veterans Day, which is June 25, and is celebrated on the grounds of the MWDM.

Not only are war dogs who served alongside the military honored and buried at the MWDM, but current therapy dogs who have aided and aided veterans in coping with injuries are also honored.

One such therapy dog, Luke, was buried with honors last week.

The 12 Most Popular Wedding Registry Gifts of 2022, According to Experts