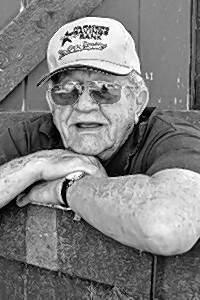 Due to the ongoing COVID-19 pandemic, services will take place at a later date. The date and time of the service will be displayed as they become available. In lieu of flowers, memorials can be made in AW’s name to the Salvation Army or to a charity of the donor’s choice. Becker & Son Funeral Home in Fayette is helping AW’s family. Online condolences can be made at www.beckermilnesrettig.com.

AW Martin (Albert William) was born August 17, 1926 in Marion Township, Linn County, Iowa, the son of Albert William Martin Sr. and Ida Marie (Neilson) Martin. He was the second child in the family with Louise, three years his senior. His two brothers were Loyd, born 17 months later, and Paul born 16 months after Loyd. All three brothers were dressed alike and a lot of people thought they were triplets.

From the age of 4, he knows he was born to be a farmer. He graduated from Alburnett High School in 1943 at the age of 16. On February 5, 1945, he joined the United States Army and served in the Philippines as chief clerk. He was released on December 11, 1946, as a sergeant. He came home to do what he was supposed to do and cultivated with his father and brothers.

In June 1948, while playing for an Alburnett team in a softball league in Marion, he became a third base coach. Sitting on the shore near 3rd Base was a young woman who was to be his wife and companion, Jean Quinn. They were married on May 29, 1949. They lived very close to where he was born for eleven years, during which time five children were born, Douglas, Dennis, Vicki, Debra and Duane.

In 1960, they moved to a farm south of Fayette, Iowa. Their farms became known as Marland Farms. AW has become well known as a producer of purebred pigs. The herd is nationally recognized for its production and a quality product. The herd is the longest continuous Hampshire herd in the country.

In addition to agriculture, AW was a 4-H leader, school board member, county chairman of the Republican Party, a certified lay leader for The United Methodist Church, and served on many local church committees and of state. He was proud to have served on the National Swine Registry Board for six years, one year as President, and the Maple Crest Care Center Board where he helped build it and has become an important part of Fayette.

In addition to his parents, he was predeceased by his brothers, young Loren and Loyd; sister, Louise, and her husband, Ralph Blackford; and her sister-in-law, Dorothy Martin.