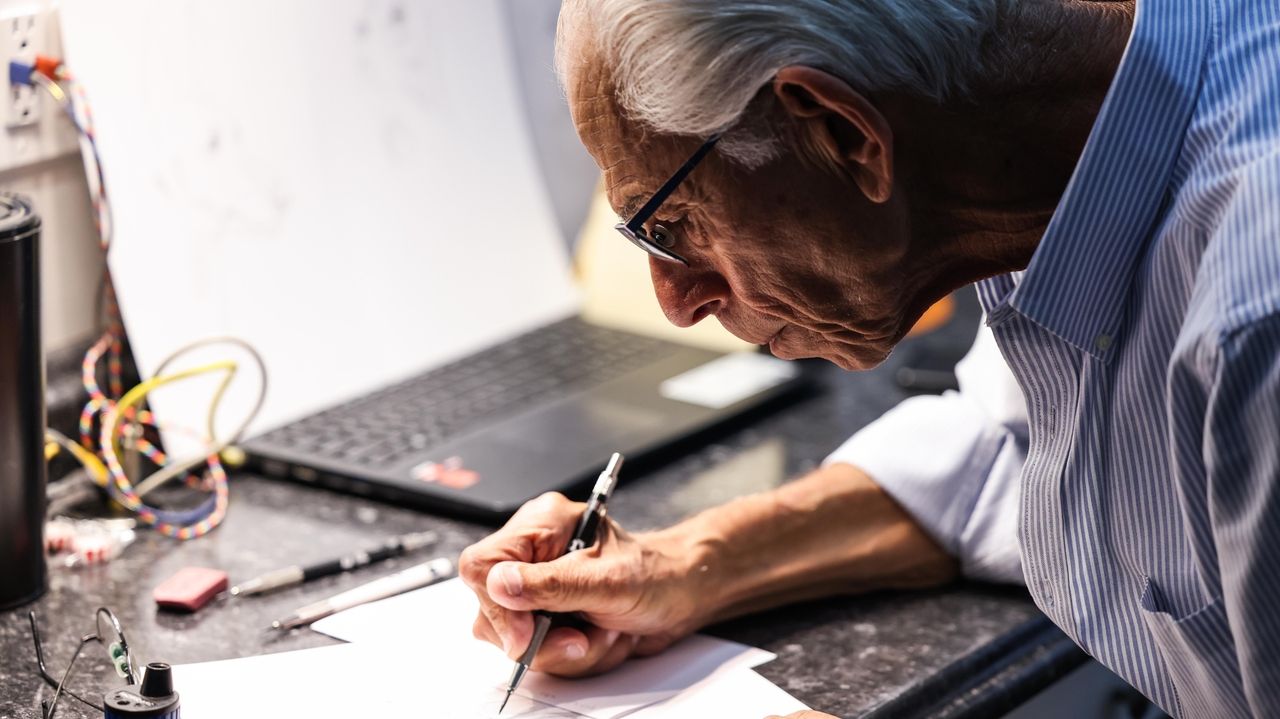 OOn this particular Monday afternoon, Alan B. Meschkow of Ridge begins one of his American Kennel Club breed-inspired dog portraits as he always does: beginning with what he calls “the triangle.”

The triangle is what Meschkow, 77, a former advertising executive and later consultant-turned-artist, calls the dog’s nose and eyes. These facial features are the starting point for the dozens of show dog portraits he has created over the past four years, including the Cavalier King Charles Spaniel he is currently working on.

“The nice part is his really high forehead, big eyes and very, very cool pug nose,” Meschkow said of the little breed loved for his gentle nature and family friendliness.

Meschkow is also working on sketches of rats and cairn terriers and a bluetick coonhound – the latter a dog “with very distinctive eyes”. The whole thing will eventually be put online with 150 other dog portraits on pinterest.com/alanmeschkow.

And in July and August, about 40 of Meschkow’s dog portraits are on display at the Longwood Public Library in Middle Island.

Some may see their 70s as a time to (finally) expire, pursue hobbies, or spend more time reading or traveling. For Meschkow, his eighth decade brought more than a reset.

“I consider myself redirected, not retired,” he said.

Meschkow was born in Brooklyn and his family lived in Jamaica Estates, Queens, until 1953, then in Plainview. He graduated from Plainview High School in 1963. As a child, he says, he often made pencil sketches of cars on loose-leaf paper, thinking he might become a car designer.

“When I was about 10, I sent General Motors some pictures I had drawn, and they wrote back a nice letter thanking me for my ideas,” he said.

But with a father, uncles and cousins ​​working in plumbing, he said: “I could very well have become a plumber, even if I didn’t want to.

He was saved from what could have been a heartbreaking decision by winning a full scholarship in 1963 to the School of Visual Arts in Manhattan, where he took classes. He also took business classes at Nassau Community College.

“My first artistic interest was drawing cars, machines, inventions and mechanical things,” Meschkow said. During the 1960s, he worked as a technical illustrator in the defense industry on Long Island and later as a graphic designer, a career derailed both by the computerization of the 1980s and a “freak tornado” in 1988 that damaged his Plainview studio. Meschkow worked in retail advertising and later as an advertising consultant before retiring in 2004.

His dog portrait project began in 2018, when Meschkow returned home from a summer morning hike in Blydenburgh County Park in Smithtown with Zara, her whippet and son, Heath.

During the walk, Meschkow explained, “We were talking about things I wanted to do and Heath asked me, ‘Can you draw again?’ ”

The answer to the question was given when Meschkow came home, picked up a pencil, and drew a 1937 Hudson coupe he had seen on the street.

“It reminded me too much of work, but I had really never done anything with dogs, and there was Zara,” he said. He took a few pictures of his dog, sketched it out and just like that, “the joy of creating a simple work of art was back.”

“After all these years of exploiting my artistic talents for financial gain, a spark was ignited when I put pencil to paper,” he said.

The following month, he embarked on a project which he has since pursued with relentless stubbornness: to draw a portrait of each of the thoroughbreds recognized by the American Kennel Club, the venerable registry that promotes and sanctions events, including the Westminster Kennel Club Dog Show held in June in upstate Tarrytown. (Meschkow says his project is independent of the AKC, though he doesn’t rule out approaching the club for official recognition in the future.)

“We think it’s wonderful that someone wants to document the beauty, form and function of our treasured breeds,” said Brandi Munden, AKC vice president of communications and public relations. “We can’t wait to see the results.”

Working 10 sketches at a time, Meschkow approaches 160 portraits, at 40 of the 200 breeds recognized by the AKC. There may be more, of course, if the AKC continues its tradition of adding breeds to its registry – most recently the Bracco Italiano.

Meschkow begins each portrait by studying photos of dogs that meet the AKC Breed Standard, a description of the ideal dog of each recognized breed. He works with mechanical pencils on Strathmore Bristol, a thick, high quality paper with a smooth surface for drawing.

“I work with very light strokes, building layers on top of each other, which create a realistic image that tells you, the viewer, that you are looking at something that is looking at you.”

Each portrait takes six to 12 hours, depending on the details involved in capturing the breed’s appearance and temperament. Long-haired dogs, like the Bergamasco, a large hairy Italian sheepdog, take the longest, he said. He estimated the project has taken 400-500 hours so far.

Occasionally he will base a portrait on a single dog, as he did two years ago for family friend Kalena Champlin, 44, of Westbury. While at a restaurant in Florida, Meschkow took a photo on his cellphone of Champlin’s beagle, Cash, a top show dog champion and gun dog competition winner who was sitting under the table .

“It catches Cash’s curious nature,” Champlin said of the sketch. Both Cash and Zara portraits are included in the Library and Online Collections.

Florida is where Meschkow and his wife, Gail, a retired elementary school teacher, spend November through May in their high-rise condo in Hallandale Beach, just north of Miami Beach, Florida. Meschkow plays golf, takes his sporty 2007 Pontiac Solstice to car shows, and walks the beach and nature trails with Zara, who has competed in AKC events.

In Long Island, he and Heath, whose whippet, CJ, is an AKC Field and Show Champion, are active in the Long Island Dog Owners Group, for which Heath regularly organizes pack walks. at local parks and beaches.

Over the past five years, Meschkow has also put her creativity to work for the children of her daughter, Jodi. He built an 11-room dollhouse for his granddaughter, Raquel, and an auto shop and 1/24th scale residence for his grandson, MJ.

And later in July, Meschkow will play mentor to Gen Z, leading a dog portrait basics workshop for teens at the Longwood Public Library.

Meschkow hopes to give students “a better understanding of what they see when they look at something, so they can draw it more effectively” before finishing and framing an original sketch. “My intention is to leave them with a memorable experience, artistic guidance and things that could carry them through life,” Meschkow added.

With a second Pinterest page, beautiful cupsdedicated to mixed portraits, Meschkow has plenty on his plate.

“Now that I can call myself an artist, I’m one of the lucky ones who doesn’t need to retire. I can draw what I want, where I want, when I want,” he said.

Two years ago, when he was 75, he laid out a “25-year plan” which he hopes will help him break the record set by Al Hirschfeld, the legendary Broadway cartoonist who worked until his death at age 99.

Says Meschkow, “I’m physically healthy, and it’s not physically difficult to draw. I can do this until I’m 100.


Looking for a sneak peek into Alan Meschkow’s multi-year pet project? About 40 of his original drawings of dog breeds recognized by the American Kennel Club are on display until August 31 at the Longwood Public Library in Middle Island. For more details, visit longwoodlibrary.org or call 631-924-6400.